Japanese Prime Minister Shinzo Abe’s ruling bloc was headed for a big win in Sunday’s election, bolstering his chance of becoming the nation’s longest-serving premier and re-energising his push to revise the pacifist constitution.

A hefty win raises the likelihood that Abe, who took office in December 2012, will have a third three-year term as LDP leader next September and go on to become Japan’s longest-serving premier. It also means his “Abenomics” growth strategy centred on the hyper-easy monetary policy will likely continue. 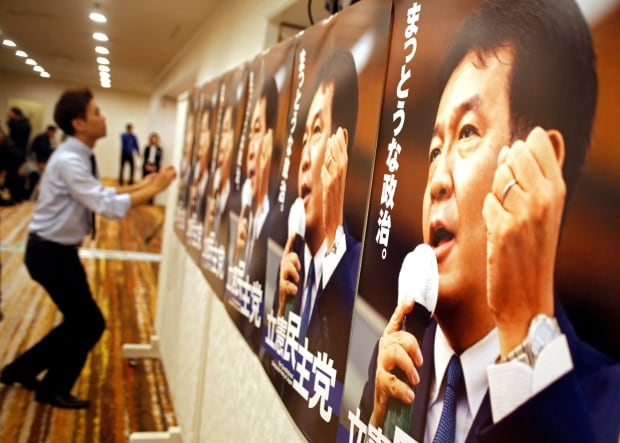 A staff member of Constitutional Democratic Party of Japan puts posters of the party’s leader Yukio Edano at their election headquarters in Tokyo on Sunday. (Toru Hanai/Reuters)

Final official results from the election, which coincided with an approaching typhoon, are expected early on Monday.

The U.S.-drafted constitution’s Article 9, if taken literally, bans the maintenance of armed forces. But Japanese governments have interpreted it to allow a military exclusively for self-defence.

Backers of Abe’s proposal to clarify the military’s ambiguous status say it would codify the status quo. Critics fear it would allow an expanded role overseas for the military.

Abe said he would not stick to a target he had floated of making the changes by 2020. “First, I want to deepen debate and have as many people as possible agree,” he told a TV broadcaster. “We should put priority on that.”

The LDP’s junior partner, the Komeito, is cautious about changing the constitution, drawn up after Japan’s defeat in World War Two. Several opposition parties favour changes, but don’t necessarily agree on details.

Amendments must be approved by two-thirds of each chamber of parliament and then by a majority in a public referendum.

“Now that pro-constitutional change parties occupy more than two-thirds of the parliament, the constitution will be the most important political issue next year,” said Hidenori Suezawa, a financial market and fiscal analyst at SMBC Nikko Securities. “And as we saw in the U.K. … a referendum could be tricky.”

So while Abe is likely to be prime minister for the time being, it is too early to say whether he can stay in power until 2021.” Abe declined to say if he’d run for a third term.

Abe had said he needed a new mandate to tackle a “national crisis” from North Korea’s missile and nuclear threats and a fast-aging population, and to approve his idea of diverting revenue from a planned sales tax hike to education and child care from public debt repayment.

He called the poll amid confusion in the opposition camp and an uptick in his ratings, dented earlier in the year by scandals over suspected cronyism and a perception he had grown arrogant after nearly five years in office.

Abe has backed U.S. President Donald Trump’s tough stance towards North Korea, which has test-fired missiles over Japan, that all options, including military action, are on the table. Trump is to visit Japan Nov. 5-7 to reaffirm the leaders’ tight ties.

That party absorbed a big chunk of the failed main opposition Democratic Party, which abruptly decided to run no candidates of its own. But voter enthusiasm soon waned despite its calls for popular policies such as an exit from nuclear power and a freeze on the planned sales tax rise.

Koike did not run for a lower house seat herself — she was in Paris for a climate change event on Sunday — and failed to say whom her party would back for prime minister.

“We had sought to put policies first. But we ended up with a very tough outcome, so I deeply apologise for that,” Koike told NHK.

A new Constitutional Democratic Party of Japan (CDPJ), formed by liberal former DP members, was vying with Koike’s party for the top opposition spot, although both are now set to have just a fraction of the LDP’s presence.

“Day by day, we felt we were getting more voter support for our call to revive more decent politics, and not fret about whether it’s right or left wing,” said CDPJ lawmaker Tetsuro Fukuyama.

Several experts noted the ruling bloc’s win was less a victory for the conservative, long-ruling LDP than a defeat for a divided opposition.

“Simply put, this was the self-destruction of the opposition,” said Zentaro Kamei, a senior research fellow at think tank PHP Institute and former LDP legislator.

“It’s not just that our party has become arrogant and complacent. People are also getting increasingly fed up with us,” he told NHK.

Abe, 63, has already led the LDP and its partner, the Komeito, to four landslide wins since he took the helm of the party. But turnout has been low and the LDP has typically won with about 25 percent of eligible votes. Others either stayed home or backed opposition parties.

Kyodo news agency estimated turnout on Sunday — when heavy rain from powerful Typhoon Lan lashed much of Japan — at 53.7 per cent, one point above the record low in the last lower house election in 2014.